By the end of April, the plan is that the equivalent of 14 miles of racking will be filling up with sofas, mattresses and other home furnishings at Furniture Mart USA’s expanded warehouse and distribution center.

For now, they’re putting on finishing touches in preparation for a certificate of occupancy that will allow the new state-of-the-art facility to begin operations. 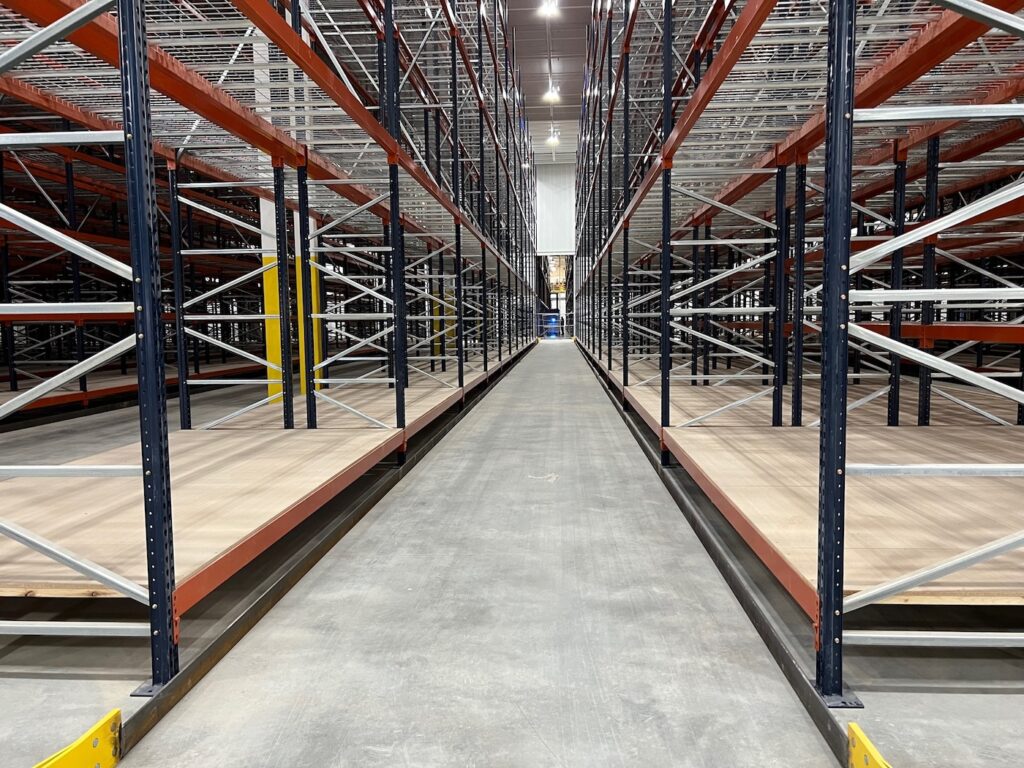 It’s also a project ready to meet the market at what the company believes is an opportune time.

“We believe if we can have the product on hand, we can beat the competition, so we invest not only in the building but the product itself with sophisticated predictive models trying to forecast what the customer is going to buy,” Eichmann said. “They’re right more than they’re wrong.”

Much of the product that will fill these racks already is on order, he added. 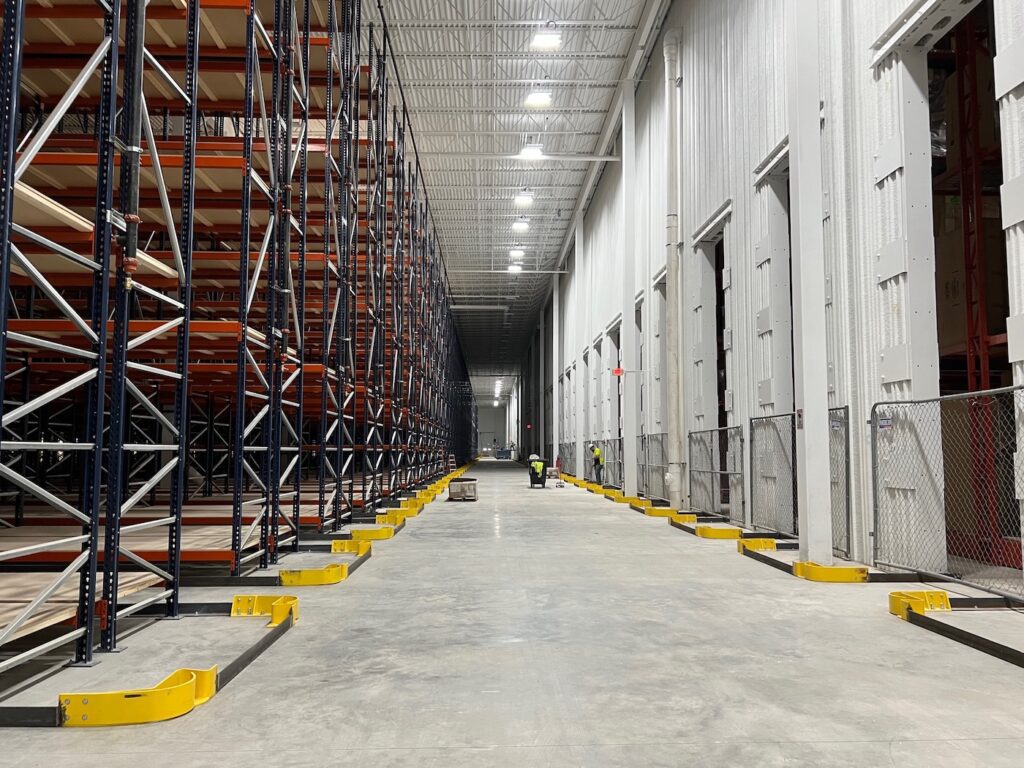 “What’s interesting is manufacturers, since COVID hit, are moving their operations back to North America, so many are coming to the U.S. or Mexico from China and Vietnam,” Eichmann said.

If you think trying to coordinate it all – the design, the ordering, the construction – takes a massive effort, you’re right. And in the case of the Furniture Mart project, it all came together thanks to partners who helped navigate a path to development. 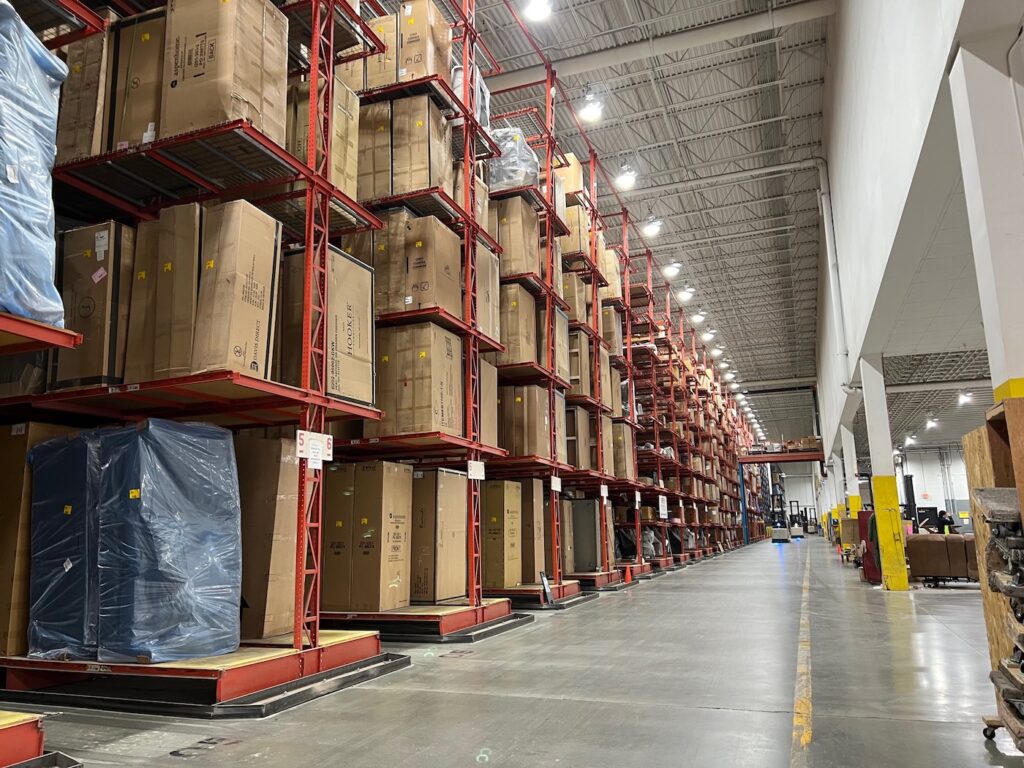 “We first heard about potential plans for this project several years ago, so it’s very exciting to see it get built and become a top five industry building permit in our community for 2021. That puts this project in the same conversation as investments made by FedEx, Lineage Logistics and Avera for last year, and it shows how Sioux Falls is a growing market for warehousing and distribution.” 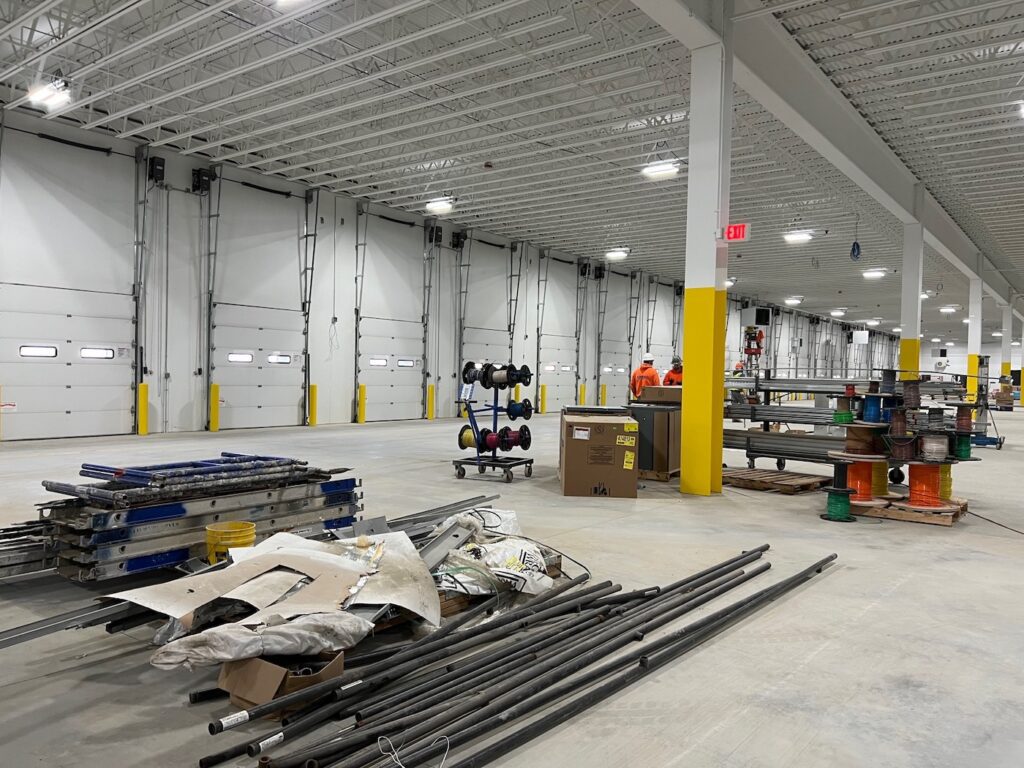 But the building’s location along 60th Street North east of Minnesota Avenue brought some hurdles, given its proximity to the Big Sioux River and necessary flood control. 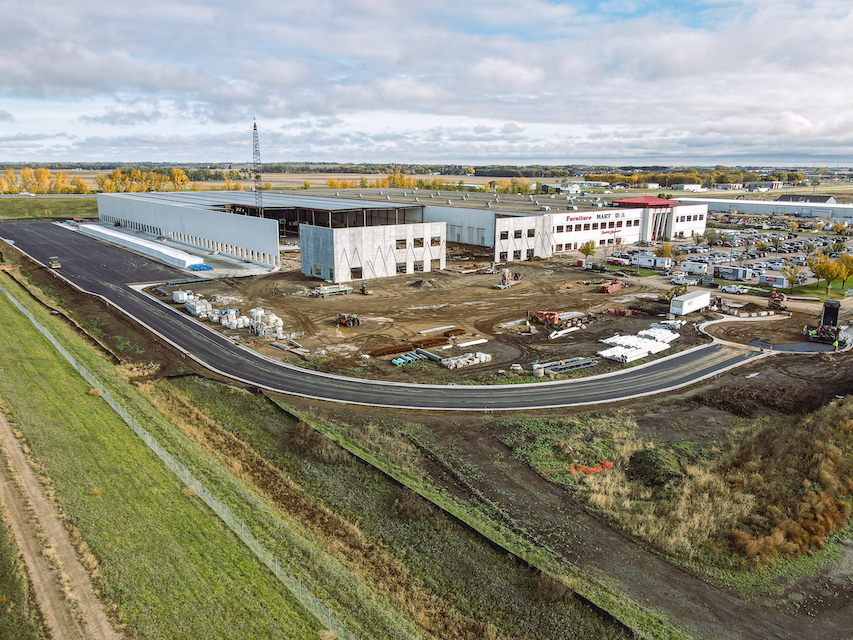 “That brought certain regulatory requirements,” Gray said. “We identified those would have an impact on the expansion and timelines, and helped make connections with federal partners, plus coordinated local and state programs available to assist with the expansion.”

With guidance from U.S. Sen. Mike Rounds’ office and support from the state of South Dakota, Furniture Mart was able to complete the necessary requirements through the Army Corps of Engineers in record time. 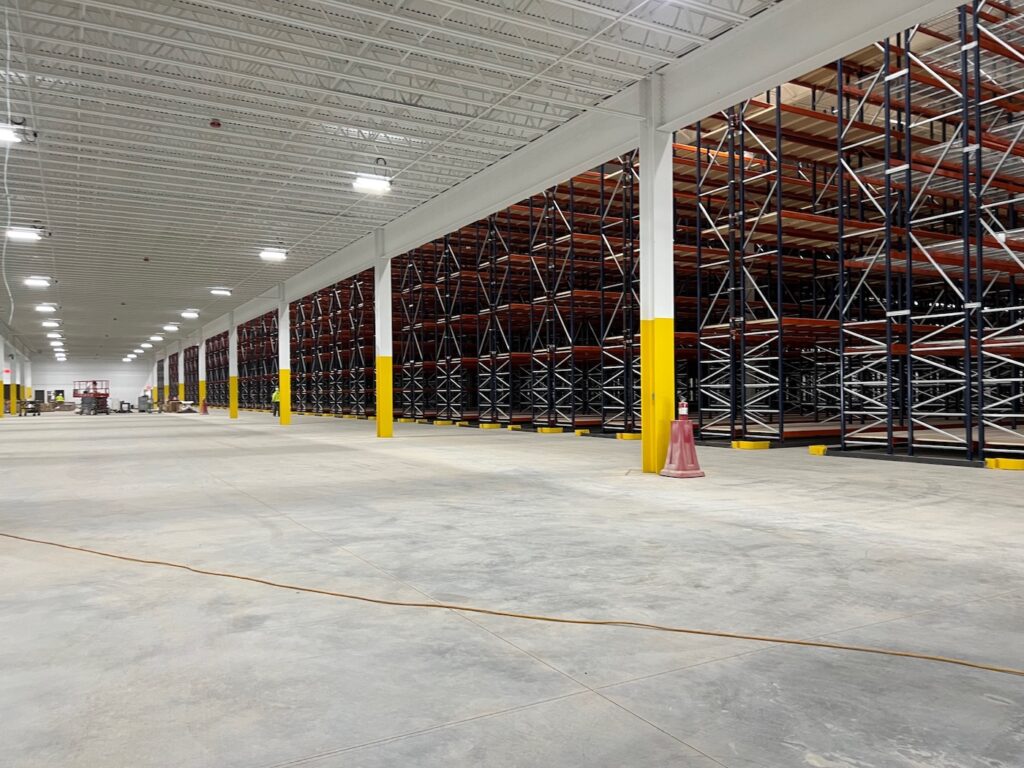 “That really made a difference in getting this project done,” Eichmann said. “It was a 10-month process, but I’m told it easily could have been 15 months or more. This could have been a complicated and daunting process, but both at the local, state and federal level there was sincere interest in working with us.”

While some might think of the Development Foundation as bringing in new business, its efforts to help retain and expand existing business are just as robust.

“I like to tell businesses if they’re thinking of expansion, especially if it’s in the next five years, we want to talk to them,” Gray said. “Expanding businesses often will work with a banker, an engineering firm, architects, commercial brokers, but having the Development Foundation as a member of the team is one more layer to help reduce risk and potentially identify other opportunities for your business that come with expansion and investment.”

The organization brings a different perspective to the conversation, he added.

“Viewing projects through an economic development lens is what we do every day, and we recognize things you and others might not be aware of, whether it’s the opportunity for a low-interest loan, workforce training assistance or just another connection we can make that you weren’t originally thinking about.”

“Mike Gray definitely was empowered to be effective in helping us and really helped shepherd us through the process,” he said. “We absolutely appreciate the relationship and are happy to deliver the project to the community.”

The ripple effect of such an investment can be big.

In the case of Furniture Mart’s project, “we did as much locally as we could,” Eichmann said. “It was important to us. It was important to Bill Hinks, our founder and chairman, and when we looked at construction bids side by side, if there was any way to keep the business local, we did it.” 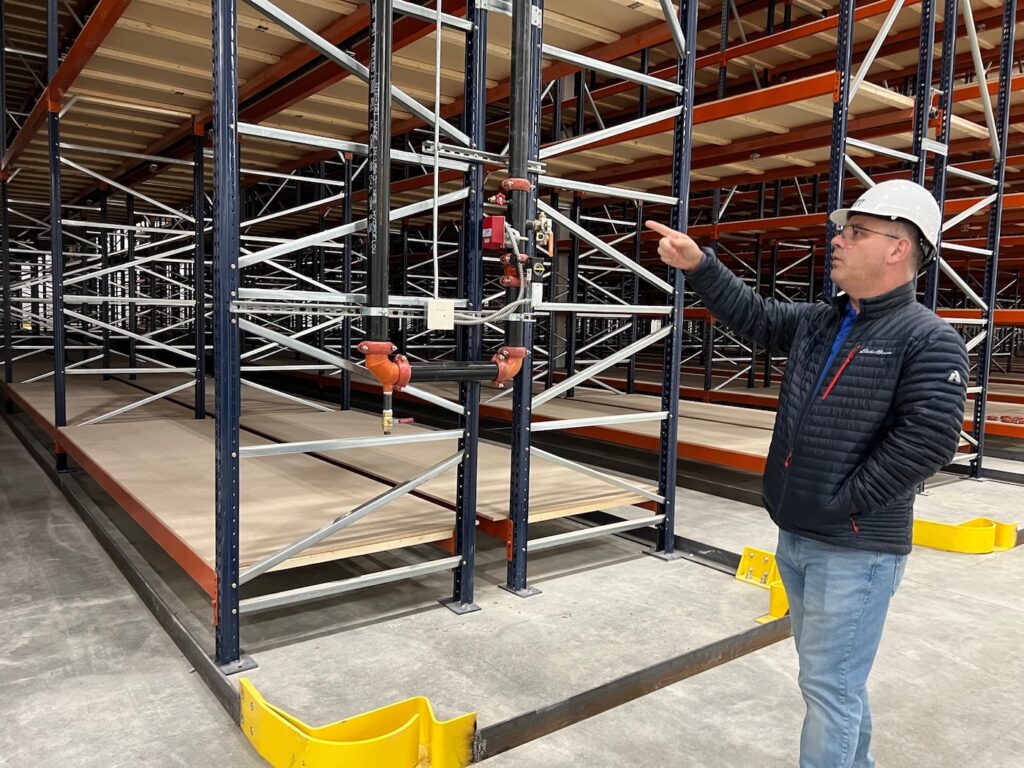 The expansion also will add 50 jobs over time, he estimated.

“What we find is in markets where we compete for talent, we’re winning because of our family culture, our active participation in the business and the fact that we recognize it can be hard work and we pay accordingly,” Eichmann said.

Furniture Mart will wrap up its retail additions later this year, adding Ashley HomeStore and Furniture Mart locations there and ultimately creating one of the largest buildings in Sioux Falls. 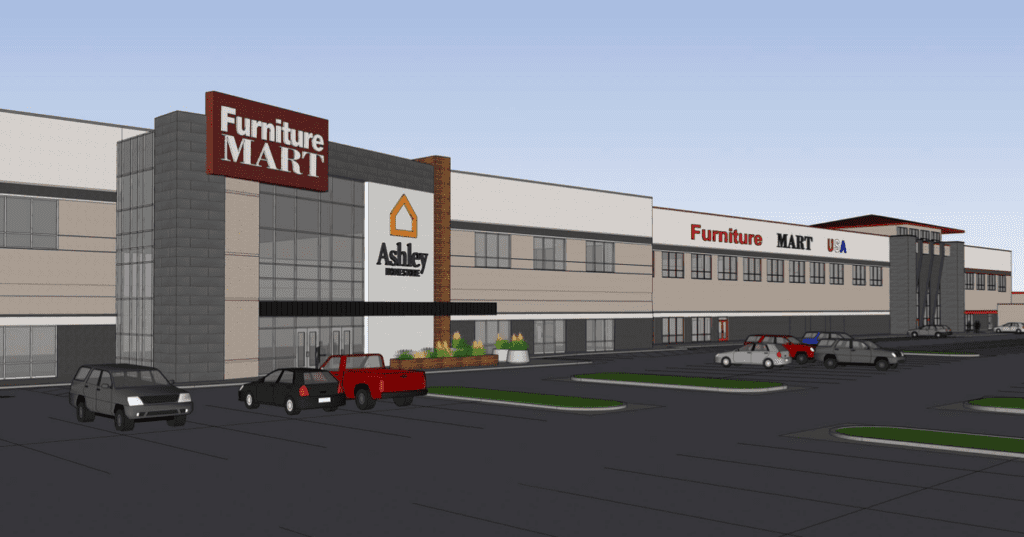 “This company really is a great example of what we like to see in a company’s economic development journey in Sioux Falls,” Gray added.

“Bill Hinks was an entrepreneur in the 1970s, saw the opportunity and had a vision and now has grown to be among the largest furniture distributors in America. They employ hundreds of people and have grown with Sioux Falls, increasing the tax base and employee wages while donating millions to nonprofits. They’re homegrown, family-owned and attached to the community, which is exactly the sort of business we want to support.”

Is your business looking to expand in Sioux Falls? Contact Mike Gray at 605-595-4243 or mikeg@siouxfalls.com.