Back Around the Metro

The Sioux Metro Growth Alliance has named multiple organizations and individuals winners of its 2020 Partners in Progress Awards. The awards were presented at our annual meeting on February 25, 2021. 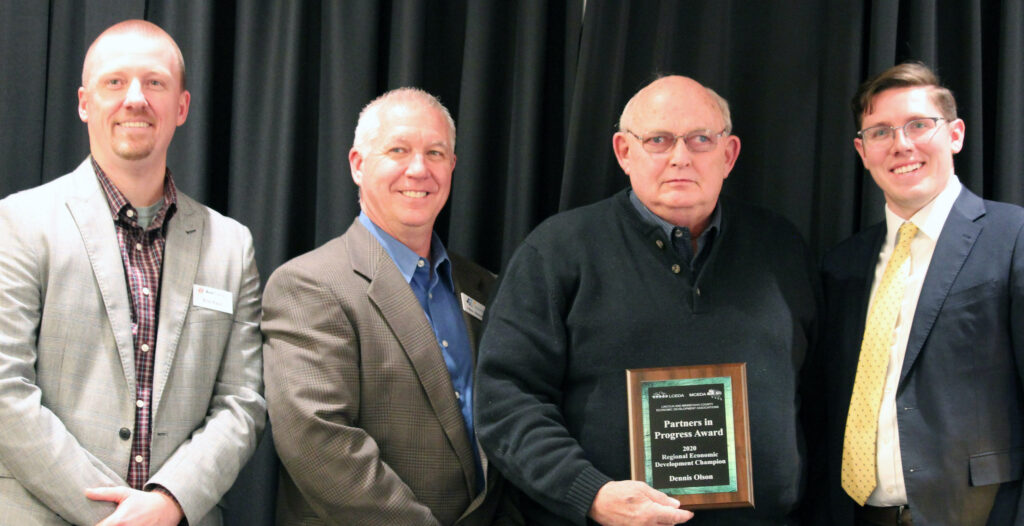 This award is given to an individual living in or working in Minnehaha or Lincoln counties who has shown active support for community development through recent or cumulative past service to economic development and community enhancement.

Dennis Olson has an accomplished career in economic development, including a partnership to bring businesses together with public sector partners to create the Corson Industrial Park. His long-term economic philosophy has created hundreds of jobs in the Brandon area, with thousands of dollars of property taxes.

“It was an emotional night for me,” Olson said. “I don’t get very emotional, but it was a surprise. I started out here in 1986, and receiving this award showed me that they – this group of people – appreciate what I do.”

He’s also a willing mentor, helping others understand what goes into economic development and thinking regionally in his approach.

“I’m a firm believer that you build communities by providing primary jobs – that’s what economic development does, and that’s one of the reasons why we’ve been as successful as we have in Brandon,” Olson said. “We have the amenities of the big community in Sioux Falls right next door, but we still feel like small-town South Dakota.”

The Business Partner of the Year is awarded to a company, enterprise or entrepreneur doing business in the Sioux Falls metro area that has shown outstanding community development support or regional economic development partnership activity during the preceding year.

The Corson Development Association, comprised of private and quasi-governmental organizations, helped support the creation of 451 primary jobs and nearly $30 million in taxable property.

Together, the partners contributed almost $1 million in the early 2000s to purchase and develop 117 acres in the metro area. Thanks to a strong economy and willing partners, this group was able to close out the partnership late in 2020.

After creating jobs and tax base, the goal was to return 1.5 times the initial investment to each of the shareholders, which it did.

The partners that helped make this group possible are:

This title is awarded to an investor member community that has demonstrated new ideas in community development or achieved a community goal through partnership and community effort.

The community of Canton identified a need for housing years ago and came together to help address it.

“The city of Canton is essentially out of space when it comes to incoming residents seeking either single-family or multifamily homes,” said Scott Larson, CEO and Senior Director of the Sanford Canton-Inwood Medical Center in Canton. “The 62 acres of housing development that we’ve worked on has been nearly 30 years in the making, has taken an enormous team effort, and will be a big win for the Canton community as a whole.”

The local economic development group worked with a health foundation to incorporate parks and green space into a preliminary plan for a housing development that would address the shortage in the community and create active, healthy lifestyles.

This economic development group was able to secure an option on the property owned by the health foundation, which then allowed it to start pitching the site to interested parties.

After a competitive selection process, one developer, ISG out of Sioux Falls, was chosen, and dirt should be moving in 2021 or 2022 for Canton’s next single-family and multifamily housing development.

“The progressive leaders of the Canton Economic Development Corporation recognized they needed to take a different approach to addressing their housing needs, and with the help of ISG, we have a thorough analysis of several prospective housing development options throughout the community,” said Steve Watson, Development Strategist at ISG. “Canton’s recent Partners in Progress Award is a recognition of the Canton Economic Development Corporation’s (CEDC) willingness to roll up their sleeves, use their resources, and tackle a challenge that will help propel the community forward.”

And according to Watson, the economic growth of the Sioux Falls metro area will only continue. “The Sioux Falls Metro is the economic engine in the tri-state area. The region will continue its strong growth, and I believe has already reached an inflexion point – which may be truly unprecedented growth for the next several years. Communities in the Metro that are willing to make the necessary investments in their infrastructure to capture this growth potential, like Canton, will rise to the top.”