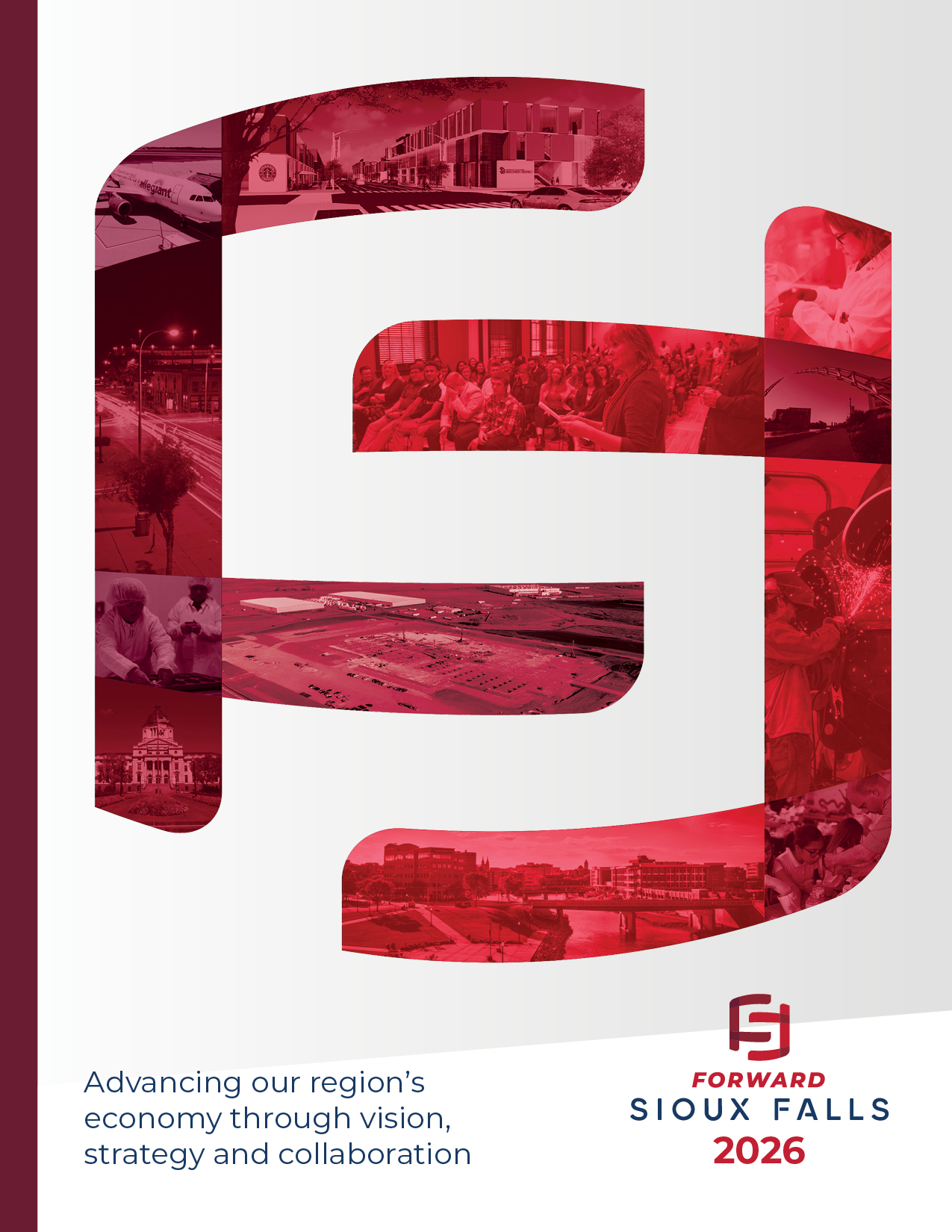 For nearly 35 years, every five years, Sioux Falls has brought an unparalleled partnership together to invest in moving the community forward.

Forward Sioux Falls is unique in the nation, bringing together the Sioux Falls Development Foundation, Greater Sioux Falls Chamber of Commerce, the public sector including the city of Sioux Falls and a broad cross-section of private investors from the business community.

This platform — Forward Sioux Falls — has become nationally recognized for creating decades of economic growth and corresponding quality-of-place enhancements, making Sioux Falls the envy of many communities across the country.

So as community leaders contemplated the next Forward Sioux Falls program, there were decisions to be made.

“They went out and talked to our top 20 to 25 investors, along with community leaders, and said: ‘What do you think? Do we start planning to go forward or look at asking everyone to extend one more year on their five-year investment?’ ” said Tom Micelotta, who facilitated the feasibility study for the campaign through National Community Development Services.

The answer was resounding: A one-year extension wasn’t the answer.

“They said, no, we can’t think of a better time given all the uncertainty to make sure Forward Sioux Falls stays in place,” Micelotta said. “For 34 years, it’s been a great balance between creating jobs, retaining jobs, quality-of-place and workforce development, and we wanted to keep our foot on the gas.”

By July, conversations grew to include 65 companies as a preliminary Forward Sioux Falls plan was in place.

“There was overwhelming support for the plan being exactly what was needed and also that we need to launch the campaign now,” Micelotta said.

Forward Sioux Falls then assembled a record 40-person leadership Cabinet, a diverse group that will help move the process forward with a goal of $15 million in cash investments over the next five years. 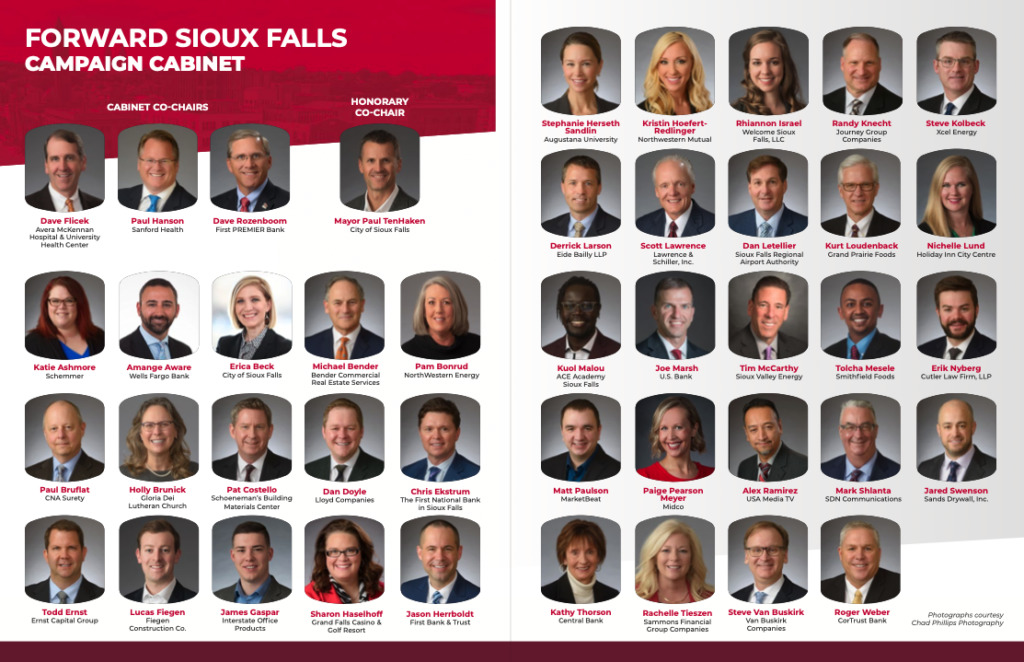 “There’s always been a balance with Forward Sioux Falls between job creation, diversification, the corresponding population growth that needs to occur and the quality-of-place investment necessary to support that,” said Rozenboom, who also helped lead the previous Forward Sioux Falls campaign.

Since its origin in 1987, Forward Sioux Falls “has helped us chart our course to building a strong community,” said Mayor Paul TenHaken, honorary co-chair.

“The 2026 campaign initiatives will set us up for future success over the next five years in key areas for our community, including housing and workforce development, which remain critical to our continued growth.”

The community has enjoyed a robust and resilient economy for many years and is poised to emerge in a position of strength post-pandemic, TenHaken added.

“To continue that growth, we need to focus on the right investments at the right time for Sioux Falls.”

Here’s a look at some of the key investments proposed by the upcoming Forward Sioux Falls program: 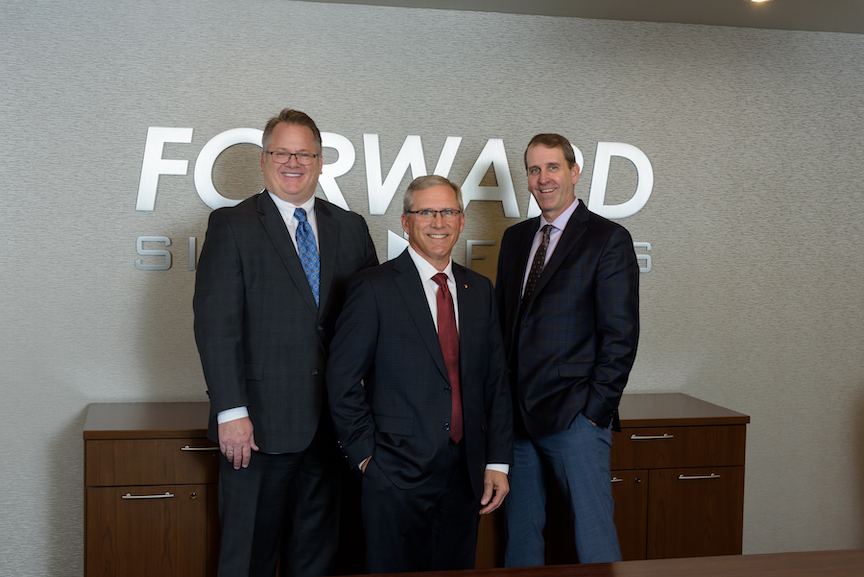 For 34 years, it’s been a great balance between creating jobs, retaining jobs, quality-of-place and workforce development, and we wanted to keep our foot on the gas.

Additionally, the Forward Sioux Falls program will partner with the city of Sioux Falls and local and federal housing organizations to establish a fund that will provide resources to address accessible workforce housing needs.

“Accessible housing is on everyone’s list,” Hanson said. “As we look at our employees, and within the community, we’ve had a lot of internal discussions about it.”

Sioux Falls can continue to attract jobs, “but if we don’t have places to live, it will be hard to support people to be employed in them,” Flicek added.

Additionally, it pursues a comprehensive marketing program to target industries, companies, site selectors and other professionals.

“One of the things I heard overwhelmingly in conversations leading up to this campaign was that our investors support aligned strategies for growth and development, for workforce and for bringing more people to our service area,” Hanson said. “There isn’t one item we’ve talked about that doesn’t benefit all of us.”

A signature project to drive innovation in the coming five years is a proposed cyber/IT park, which will receive seed funding from Forward Sioux Falls.

It’s envisioned as a partnership between Dakota State University and the city of Sioux Falls to create a cyber/IT campus.

“We’re really excited about exploring that relationship, and I think we’ll be good for each other, and there’s significant need in our community to build out those resources,” Rozenboom said.

Forward Sioux Falls also will continue to assist with operating support and, more importantly, to provide funding to target bioscience firms to locate in the USD Discovery District.

Additionally, program support for the entrepreneurial community and funding to expand initiatives for the Zeal Center for Entrepreneurship are planned.

Forward Sioux Falls historically has supported quality-of-place initiatives and the continued effort to market and attract air service in Sioux Falls – both priorities that continue in the new plan.

Additionally, an Innovation Center of Excellence is proposed as a new center within the Chamber of Commerce to deliver programming through public-private partnerships focused on diversity, equity and inclusion.

“It’s important we continue to embrace the diversity occurring in our community, with a focus on our K-12 schools and those pursuing post-secondary education. Exposing students and adults to opportunities that prepare them for their next step in life allows them to contribute most productively to our community.”

How will the next Forward Sioux Falls program measure success? Here’s a look at some of the key outcomes by 2026:

The current program also includes a refreshed Future Sioux Falls strategic plan, which will take a comprehensive, long-term look at the metro area’s needs and opportunities.

“This will be a really energizing look at our future, and there will be an opportunity for broad-based community input,” Rozenboom said.

Forward Sioux Falls has a record to show it can achieve ambitious goals.

Sioux Falls has been named the No. 1 small city for business and careers by Forbes 12 of the past 20 years.

“This is a true example of a partnership between public and private, and it works very well,” Hanson said.

Businesses told the campaign leaders what makes Sioux Falls unique is “we don’t build a moat,” Flicek added. “We allow other businesses to come in, and expand and grow the whole pie.”

“What’s unique about Forward Sioux Falls is it’s a central repository of ideas, as opposed to each of our businesses making up our own ideas. Paul and I are professional colleagues. We compete for health care, but we want to prosper Sioux Falls. So organizations like Forward Sioux Falls bringing common solutions to our problems is what makes it so successful.’

And the current campaign already has attracted one new resident – consultant Micelotta, who moved to Sioux Falls from Florida during 2020.

“I drank the Kool-Aid,” he said. “I live here now. So I’m a big proponent of it all. People ask me what’s so special. It’s the people. Look at our three leaders and honorary chair, the mayor. I wish I could bottle it and sell it to other communities.”

Businesses will be hearing directly from Forward Sioux Falls in the weeks ahead, but to get connected right away, contact Mike Lynch, director of investor relations, at 605-373-2008, and visit forwardsiouxfalls.com.